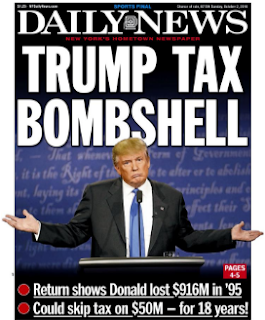 This weekend, The New York Times obtained a portion of  Donald Trump‘s 1995 income tax returns that seem to suggest that he could have avoided paying federal income taxes for the last 18 years. The reason? Trump reported a $916 million loss back then, which could have helped him legally avoid paying taxes for years.

According to lawnews.com, the story behind how the Times got a hold of the returns is even more mysterious. The three pages were apparently sent to Times reporter Susanne Craig anonymously. Even stranger, the document had a return address of Trump Tower.

Trump’s attorney immediately sent a letter to the editors of the Times arguing that publishing the records is “illegal” because Mr. Trump has not authorized the disclosure of any of his tax returns.” The Times will likely assert a First Amendment defense, and they may have a very strong defense.  However, there is one provision in federal law that will make this difficult for the newspaper.

Federal law does make it illegal for “any person” to publish an unauthorized tax return:


It shall be unlawful for any person to whom any return or return information (as defined in section 6103(b)) is disclosed in a manner unauthorized by this title thereafter willfully to print or publish in any manner not provided by law any such return or return information. Any violation of this paragraph shall be a felony punishable by a fine in any amount not exceeding $5,000, or imprisonment of not more than 5 years, or both, together with the costs of prosecution

Dean Baquet, executive editor of The New York Times, said during a September panel discussion at Harvard that he would risk jail time in order to print Trump’s taxes, as it was a matter of “public concern.”

In addition, whoever sent the returns to the newspaper could also be in some legal trouble.
Posted 3:44:00 AM