Gannett’s long quest to buy the newspaper company known as Tronc is nearing the finish line.

Politico is reporting that asset purchase agreement drafts have been exchanged by Gannett, the country’s second-largest newspaper chain and publisher of USA Today, and Tronc, formerly known as Tribune Publishing and the publisher of such broadsheet mainstays as The Los Angeles Times, The Chicago Tribune and The Baltimore Sun. 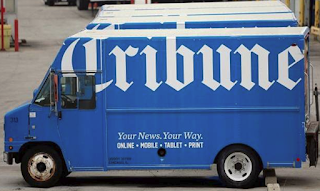 The announcement of a deal could come as soon as business opens on the fourth quarter of the year, as early as Monday morning.

Tronc’s board of directors held a meeting Thursday, sources said, that was likely focused on the sale. Attorneys, they said, were at work on documents at the end of last week.

The likely price: $18.50 to $19, a slight rise from Gannett’s most recent offer of $18, one rejected by Tronc chairman Michael Ferro and his board August. Such a price would have represented a 140 percent premium over the then-trading price of Tribune Publishing shares before Gannett CEO Bob Dickey made his first offer for the company’s nine metro newspapers in the spring. Those papers, and their growing digital news operations, include some of the country’s largest and best known ones. The Los Angeles Times, still employing the U.S.’s third largest daily newsroom, and the Chicago Tribune have served as Tronc’s twin flagships, and would add great luster to Gannett.