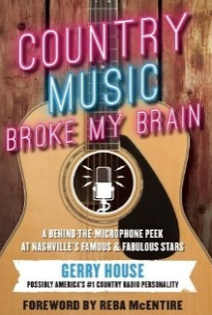 Someone would probably have to be brain-damaged or really talented to try to entertain professional entertainers over a decades-long radio show in Music City, USA.

Fortunately, according to columbiadailyherald.com, Gerry House is a little of both.

Host of the top-rated morning show, “Gerry House & The Foundation” for more than 25 years, House has won virtually every broadcasting award there is including a place in the National Association of Broadcasters Hall of Fame.

In “Country Music Broke My Brain,” Gerry tells his stories from the other side of the microphone. He reveals never-aired, never-before published conversations with country music’s biggest names—Johnny Cash, Brad Paisley, and Reba McEntire to name a few—and leaves you with his own crazy antics that will either have you laughing or shaking your head in disbelief. With exclusive celebrity stories, humorous trivia and anecdotes, and broadcasting wisdom, this book is a treat for country music fans or for anyone who wants a good laugh.

Gerry House worked in the music industry’s famed Music Row district in Nashville for 30 years, the last 22 of which found him behind the microphone every weekday morning hosting “Gerry House & The House Foundation,” the top-rated morning radio show on WSIX 98.1 FM.