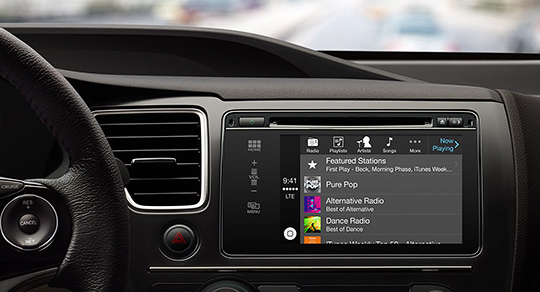 Apple has announced partnerships with a number of major automakers Monday on a new system that integrates the iPhone with in-car entertainment systems, according to CNN Money.

Known as CarPlay, the setup includes a console touchscreen as well as buttons on the steering wheel that activate Siri, Apple's voice command system. CarPlay allows drivers to make calls, listen to voicemails, hear and dictate text messages, get directions via Apple Maps and access Spotify and other music services.

The first vehicles featuring CarPlay will debut later this year from Volvo, Ferrari and Mercedes-Benz. It will be available "down the road" from automakers including BMW, Ford, GM, Honda, Hyundai and Toyota, Apple said.

Ferrari called CarPlay a "smarter, safer and more fun way to use iPhone in the car." Volvo said the partnership with Apple "promises to transform the in-car experience."

CarPlay users enable the system by connecting their iPhones to their cars using Apple's lightning charger cable. The system is only compatible with the iPhone 5, 5c and 5s.

Apple's announcement marks a push ahead of its tech-industry competitors working to integrate smartphone technology into cars.