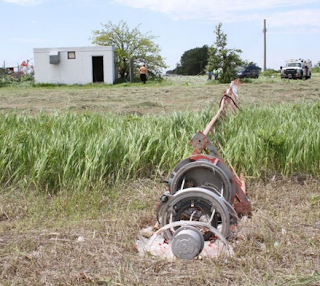 A Monday afternoon accident has temporarily knocked the station ESPN Radio 1570 KVTK-AM of Yankton off the air. Engineers and other staffers of Five Star Communications were scrambling Tuesday to find the best way to begin broadcasting again after their radio tower collapsed Monday afternoon.

The tower, which was 309 feet tall, is situated in the middle of a small, grassy field located about five miles west of Vermillion. A man cutting the grass Monday afternoon clipped one of the tower’s guy-wires, causing it to collapse shortly after 4 p.m.