KNBR and morning-show personality Bonnie-Jill Laflin have parted ways, ending what turned out to be short stay at the sports-talk station.

A station source confirmed on Thursday that Laflin was no longer employed by the Cumulus-owned station, The Mercury reports.

Laflin joined KNBR in September of 2018, adding a female voice to the all-male cast of KNBR’s “Murph & Mac” show (Brian Murphy and Paul McCaffrey). Last year, she launched a new podcast on Westwood One — “The Weekly Pass” — featuring interviews with sports superstars. 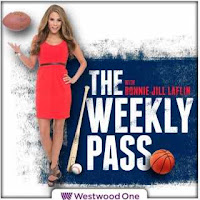 The reason for Laflin’s departure was not immediately clear, but her contract was apparently up in September and radio stations — like many media outlets — have been in a cost-cutting mode during tough economic times. Those specializing in sports have had it especially rough during a COVID-19 pandemic.

It was apparent, also, that during her run at KNBR, Laflin struggled to gain traction on the station’s overcrowded morning show, which featured additional contributions from Adam Copeland.

In an interview last year with the Bay Area News Group, the 44-year-old Laflin spoke of the difficulty of being a woman in a male-dominated sports media scene.

“It’s kind of sad that, even in 2019, women are still being asked to prove themselves, even though so many of us have shown that we can hang with the big boys,” she said. “And even when a woman is doing a really great job, you still hear things like: ‘Oh, she’s really good — for a female.'”
Posted 4:10:00 AM