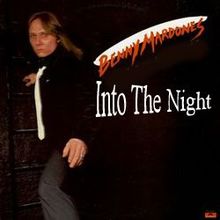 Benny Mardones, rock and soul singer-songwriter behind the '80s smash and radio perennial "Into the Night," died today at his home in Menifee, California.

His passing was confirmed to Billboard by longtime friend and record producer Joel Diamond, resulting from complications following a long struggle with Parkinson's disease. He was 73.

Mardones was born in Cleveland, Ohio and grew up in Savage, Maryland, joining the Navy out of high school to serve in the Vietnam War. Following his discharge, he moved to New York to become a songwriter, where he was enlisted by Diamond to be a staff songwriter for Mercury Records, penning material for stars like Brenda Lee and Tommy James. Various other credits followed, and in the late '70s Mardones also became a performing artist, opening for folk-rocker Richie Havens on tour in 1977 and releasing debut album Thank God For Girls the year after.

Mardones' 1980's Never Run, Never Hide album, spawned what would quickly become his signature song: the mega-ballad "Into the Night."

Elevated by Mardones' powerhouse vocal performance -- influenced by his love of both Pavarotti and Teddy Pendergrass -- "Into the Night" began climbing the Billboard Hot 100, peaking at No. 11 in September of 1980.


Mardones moved to Syracuse, NY in the mid-'80s. He was diagnosed with Parkinson's disease in 2000. Despite his illness, he continued to perform to sold-out audiences in central New York, where he retains a notable fan following. On December 16, 2017 Mardones performed "Into the Night" publicly for the last time at the Turning Stone Casino in Verona, NY.

In July 2018 Benny underwent DBS (Deep Brain Stimulation) which minimized the tremors, but unfortunately complications from the extensive surgeries created numerous other balance, stability, confusion, and pain issues. After surgery, Benny suffered multiple falls including one that dislocated his hip and shattered his pelvic bone. Continued dislocations and several surgeries later, Benny spent a long time fighting various infections. His hip replacement surgery was completed in January 2019. Since then, he dislocated his hip again and recently had another surgery to fix that.
Posted 9:34:00 AM