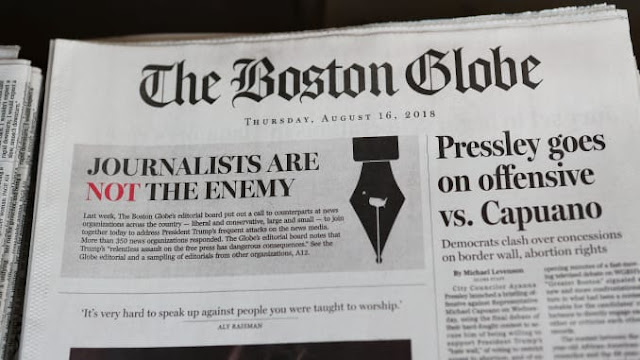 A California man was sentenced on Wednesday to four months in prison for threatening to kill employees at the Boston Globe in retaliation for its role coordinating an editorial response by hundreds of newspapers to U.S. President Donald Trump’s attacks on the media.

Reuters reports U.S. District Judge William Young in Boston said a prison sentence was necessary to punish Robert Chain, 69, for the “appalling” threats that prosecutors say he made by phone to employees at the Boston Globe and The New York Times.

William Weinreb, Chain’s lawyer, argued he deserved just six months of home confinement, saying his “empty threats” were driven not by politics but the depression of a man reeling from the suicide of his youngest son.

But while Young said those facts counseled against the 10-month prison term that prosecutors sought, his actions nonetheless warranted a term of incarceration along with a $3,500 fine and a requirement that he pay $16,500 in restitution to the Globe.

“In today’s world, where truth is a precious commodity, done right, journalism is perhaps our last best hope of having that truth on which our democracy depends,” Young said. “You attacked that.”

In May, Chain pleaded guilty to transmitting violent threats to the Boston Globe after in August 2018 it urged other newspapers nationally to run editorials denouncing what it called a “dirty war against the free press.”

More than 350 newspapers subsequently published editorials that Aug. 16 in response to Trump’s repeated criticism of new organizations as the “enemy of the American people” and of news reports he objects to as “fake news.”
Posted 1:11:00 AM