Atlanta radio legend James “Alley Pat” Patrick has died at the age of 95.

The Atlanta Constitution reports Patrick began his broadcasting career in 1951 as a disc jockey on WERD, Atlanta’s first black-owned radio station. He joined the staff of WAOK in 1954, and later worked at stations WXAP, WYZE and WQXI-AM.

Patrick, who died Thursday, became a member of the Georgia Music Hall of Fame in 2013. That same year, the Georgia Radio Hall of Fame honored Patrick as the recipient of the Founders and Directors Award.

Former V-103 morning host Mike Roberts, a 2013 inductee into the Georgia Radio Hall of Fame, remembers listening to Patrick on WYZE in the early 1980s when he first came to Atlanta. 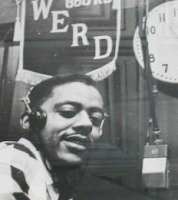 “He was just a very unique announcer,” said Roberts, who now owns a radio station in Macon. “He was a throwback to the 1960s style of radio, very funny, very creative at the same time. He did commercials for local clients like nobody else. He would criticize a client if he didn’t think they were treating customers right. He would praise them, too. He was a character.”

On his radio show, Patrick needled callers and blithely skewered racial, religious and social sacred cows. Though he was ad-libbing, some say he knew exactly what he was doing.

“Pat would play a simpleton on the air for comedic effect,” director and local filmmaker Tom Roche said. “But when you got to know him, you’d realize he’s quite a citizen of the world. He’d jet up to New York to see plays, he’s been to Africa and he’d go out to L.A. to hang out with John Lee Hooker.”