It's The First 'Rockin' Eve' With Just Ryan Seacrest 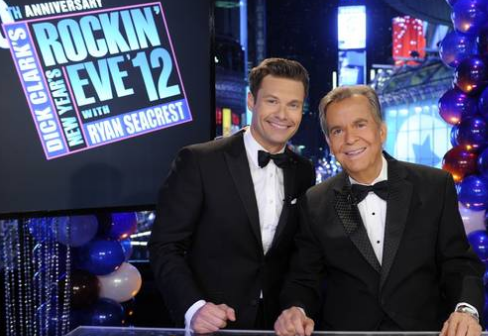 "In a world that has so much chaos and conflict, there's a moment when you look around and you feel as if we're all in it together," he tells Bill Kenenvey at USA Today.

The feeling will be a little more complicated this year. Seacrest will host ABC's Dick Clark's New Year's Rockin' Eve (Monday at 10, live ET/tape delay PT) from New York's Times Square for the first time without Clark, who died in April. The younger host began working on the show in 2005, when Clark returned to the special after having a stroke the previous year.

"It's definitely a mixed emotion. As a kid, I knew New Year's Eve by watching Dick Clark. As an adult, I know New Year's Eve recently by working with Dick Clark. I've never done the ABC show without him," he says."It's emotional, it's reflective, and, at the same time, it's celebratory, because he was such a leader and pioneer and mentor. It will be unique in so many ways, and frankly, I don't know what to expect in that first second when I sign on."

The evening kicks off at 8 ET/PT with a two-hour tribute to Clark hosted by Fergie of the Black Eyed Peas and Jenny McCarthy, featuring an appearance by Seacrest.