"These aren't really budget items; these are political statements"

President Obama defended public broadcasting from cuts on Friday, emphasizing that defunding networks like NPR and PBS would do little to rein in spending, according to a story by Michael O'Brien at thehill.com. 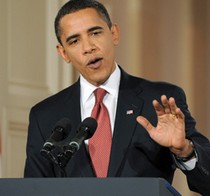 As Republicans in Congress hope to defund government assistance to the Corporation for Public Broadcasting, which in turn supports NPR and PBS stations, Obama said the cuts make little sense.

"I think it's going to be important for us to have a conversation after we get the short-term budget done, about how do we really tackle the problem in a comprehensive way," Obama said at a press conference on Friday.

"And that means not just going after Head Start or Corporation for Public Broadcasting. That's not where the money is," he added.

Republicans included in their continuing resolution to fund government the rest of this year provisions that would severely cut support for public broadcasting. Calls to defund those networks have only intensified after a conservative activist's video emerged this week showing a former NPR executive referring to the Tea Party movement in harsh terms.

Democrats, in turn, have accused Republicans of trying to defund "Sesame Street," the popular children's program on PBS.

Obama, commenting earlier in his press conference on the spending fight in Congress, urged lawmakers to steer clear of including political statements — like defunding CPB — as part of their measure to fund government the rest of this fiscal year.