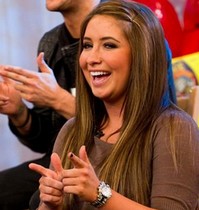 So how much does abstinence promotion, a Dancing With the Stars stint, and her forthcoming autobiography really add up to?

Duff McDonald at bltwy.msnbc.com pieces together the Palin scion's earnings.

There's a long political tradition of kids cashing in on a parent's name: Jenna Bush, Ron and Michael Reagan, the Roosevelts. But at least their dads were presidents, not half-term governors. Based on Newsweek's estimates of her revenue potential everywhere from publishing to consulting, Bristol's fueling a surprisingly sizable industry all her own.

Related story on The Daily Beast: Palin Kills It in Gun Country