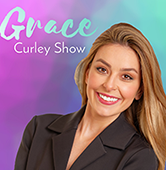 Grace Curley, the executive producer of the Boston-based Howie Carr show and a Boston Herald contributing columnist, will now be live on iHeartMedia’s WRKO.

The Howie Carr Radio Network announced Tuesday they are launching “The Grace Curley Show” beginning Jan. 4. The show will air live from noon to 3 p.m.

“I am ecstatic for this huge opportunity,” Curley said, adding she’s learned the ropes while being “mentored” by Howie Carr over the past six years.

“I’m excited to bring Grace’s show to my affiliates and clients and plan to implement many of the features we do with Howie’s show on Grace’s program,” said Kathy Carr, president of the Howie Carr Radio Network. “However, she is her own talent and will have many new elements to her daily program, too.”

Howie Carr adds, “Grace Curley is a great talent and just the sort of host talk radio needs to take the industry to the next level — a young, articulate, conservative woman who already has years of experience in drive-time programming, state-of-the-art podcast and daily print journalism.”

Curley, who also is producer of the “Dirty Rats” true crime podcast, states, “I am ecstatic for this huge opportunity to host a talk radio show and offer my perspective on politics, pop culture, and more. Over the last six years, I’ve been mentored by one of the best in the business. I look forward to putting the skills I’ve learned from Howie Carr to the test and creating a show that is interesting, unique and entertaining.”