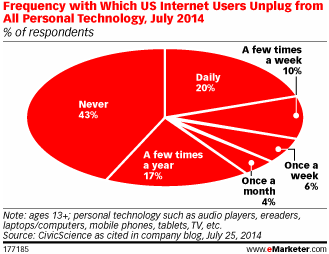 July 2014 research from CivicScience has found that 60% of US internet users were almost always connected.

Fully 43% never unplugged from all personal technology, such as audio players, ereaders, laptops and computers, mobile phones, tablets, and TV, and 17% only took a break a few times a year.

Surprisingly, 20% of respondents did manage to unplug daily.

CivicScience found that gender and income didn’t play major roles in whether or not consumers unplugged, but age did in some respects, with 18- to 24-year-olds the most likely to say they never unplugged (53%) and 23% of respondents ages 18 to 44 taking a break from personal technology a few times a year.

However, both ends of the age spectrum were almost just as likely to unplug daily, with 24% of those younger than 18 and 27% of adults 55 and older citing this frequency.