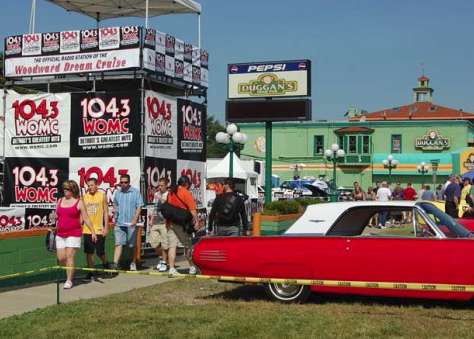 Tying in with this weekend’s Woodward Dream Cruise, CBS Radio's WOMC 104.3 FM will be broadcasting “Radio Recall,” a look back at the classic Detroit disc jockeys — and music — that provided the soundtrack to those classic cars of the 1950s and ’60s.

The Detroit News reports former Detroit air personality Jim Hampton, who was on the air at WXYZ, WJBK, WABX and WCAR, produced the three-hour program, which airs from 5-8 a.m. on WOMC Saturday.

One jock he made sure to include was Bob Lane, who was on WJBK, and there’s a special reason for that. Lane, whose real name is Bob Liggett, left his on-air job to buy a number of radio stations. After Liggett divested himself of his radio holdings, he bought the Big Boy restaurant chain in 2000.

Big Boy is sponsoring the “Radio Recall” program and has special nostalgia-themed ads that refer to its long history, dating back to 1936.