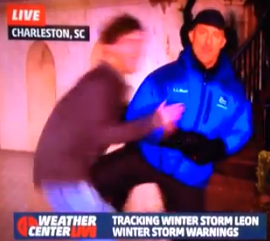 Jim Cantore, The Weather Channel's ace meteorologist, has reported live in just about every weather condition imaginable. As we found out Tuesday evening, nothing, especially a rabid onlooker, can throw him off his game.

According to Live5 News, Cantore was in Charleston tracking Winter Storm Leon, going live for the Weather Channel from the College of Charleston campus.

During his 5 o'clock hit, Cantore was saying what Charlestonians can expect from "Leon" when he gets bum-rushed by a guy who wanted to be seen on television.

Without missing a beat, Cantore delivered a knee to the kid's nether region and continued on with his live shot.

"Obviously, here at the College of Charleston they are already having a good time," Cantore quipped after the guy ran away.
Posted 5:37:00 AM