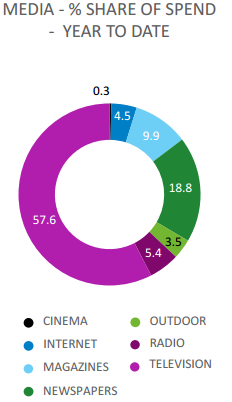 Nielsen has released its latest figures on the state of the advertising market and Internet advertising continues to be the fastest-growing medium, but it remains a small player, according to Techcrunch.com.

Global advertising across the web, mobile internet and apps collectively grew by 32.4% in 2013 — by far the biggest leap of any media — but that still worked out to a 4.5% share of the overall spend in ads. In contrast, television grew only 4.3% but remains the behemoth when it comes to ad spend, taking nearly 58% of the market.

Nielsen does not include monetary figures in its forecasts — only what percentages each platform is getting in terms of ad spend, and how those are declining or growing. For an idea of what kind of a size we are looking at here, Zenith Optimedia estimates that in 2013 ad spend passed $500 billion for the first time. It also, incidentally, gives a higher share of that spend to Internet than Nielsen does: around 21%, compared to around 40% for television.

The enduring allure of TV as an advertising medium is a large reason for why leading internet companies with ad-based business models continue to look at ways of incorporating more video-related advertising into their overall mix.

The news comes in the same week that Google (the leader in internet advertising) and Facebook (which is now taking steps to become more of an ad network) will both be reporting their quarterly earnings. While Google owns YouTube, the world’s biggest online video site, Facebook, too, has been moving into video ads as well. And of course Twitter has hung its star on television for both audience and advertising growth. 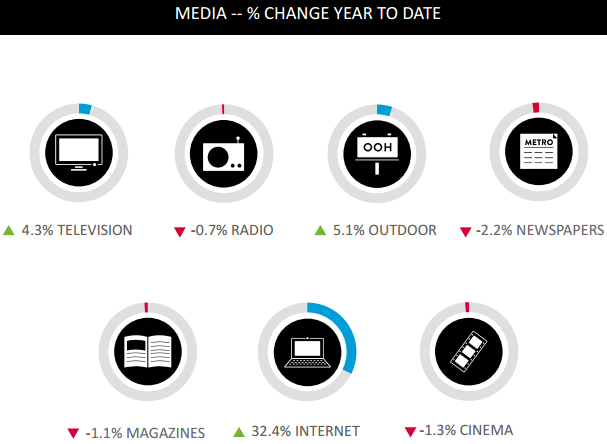 Elsewhere in the market, advertising remains challenged — with radio, newspapers, magazines and cinema all declining, and outdoor being the only other category to see any growth in 2013, at 5.1%.