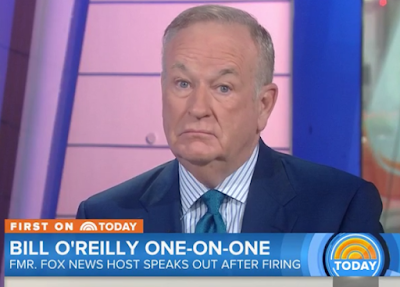 Former Fox News host Bill O’Reilly appeared on NBC's “Today” show on Tuesday to discuss the sexual harassment allegations that ultimately led to his firing from the network.

O’Reilly maintained that he did “absolutely nothing wrong” and suggested Fox News forced him out after an organized advertiser boycott ruffled some feathers at the news giant.

“This was a hit job, a political and financial hit job,” he said.

When host Matt Lauer pressed the former Fox host, asking him if it was a “vast left-wing conspiracy,” O’Reilly snapped at the anchor.

“Not vast, and don't be sarcastic,” O’Reilly shot back. “We're going to be able to prove what we say. There are more things to come, alright? This was Media Matters, Boehner Group, Color of Change, organizing advertiser boycotts to bring down Fox News and me.”