Kelly Music Research has released the results of a national study of over 500 people aged 15 to 54 which asked them about summer travel, radio station listening preferences, and actual listening while on their 2015 Summer road trips.

Overall, comparing local radio stations back home to the radio stations in destinations where they travel, 79% say they prefer their hometown stations over those they find in business or vacation travels. 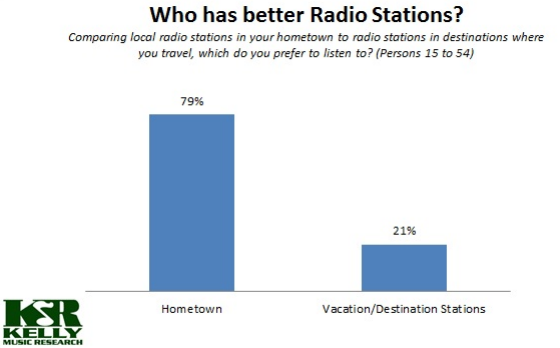 As Kelly Music Research sees in local market music surveys across the country, music tastes can vary widely from market to market - even within formats.  For example, artists like Ted Nugent, Lynyrd Skynyrd, Billy Joel, Metallica and Journey can each be Classic Rock listener favorites in some markets but not others.  So it's not surprising that well-programmed local stations do a better job pleasing the regular hometown folks than out-of-town stations.

But when they travel, radio listeners indulge themselves in local offerings. 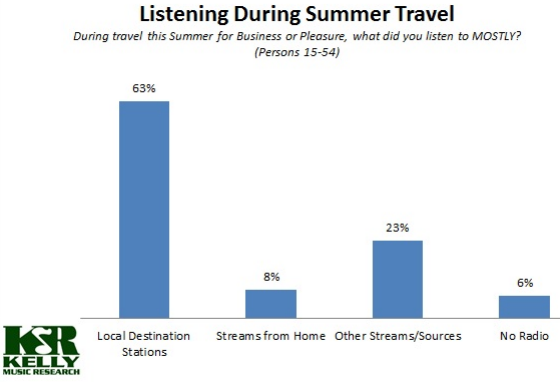 Even in this age of technology where users can stream their favorite hometown station anywhere in the world, many choose to enjoy the local market flavor, and that includes the local radio stations.  63% of those who traveled this summer tell us they did MOST of their listening to the radio stations in their destination towns.  Only 8% of travelers said they preferred streaming their hometown stations while away.  23% reported streaming audio services such as Pandora or Spotify on the road.  6% of travelers report not listening to radio or streams at all, opting for iPods, CD's or nothing at all.  Unfortunately for radio stations in popular destination towns, travelers are not included in ratings.  Based on our findings, if vacationers were included in listening surveys, stations in destination towns would likely see a noticeable spike in the Summer months.

Younger listeners are more likely to stream while away.  50% of 15-24 respondents prefer streaming with 11% streaming their hometown stations and 39% streaming some other source.  In terms of Format Preference Groups, Alternative Rock listeners were most likely to stream (54%).  Country listeners were most content to listen to the local radio stations when travelling.   73% of Country partisans say they listen mostly to their destination stations and only 3% stream their hometown stations while on the road.
Posted 3:36:00 AM