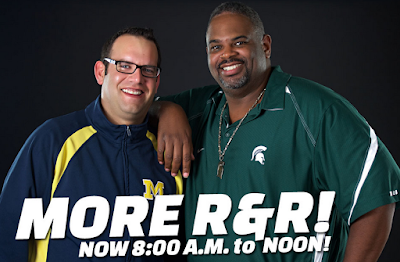 Greater Media’s Detroit Sports  WMGC 105.1 FM, has announced the expansion of the Ryan & Rico show from weekdays 10am – 12pm to 8am-12pm in the Motor City.

Beginning on Thursday September 10th, the show will be expanded by two additional hours to provide Ryan & Rico fans more local information on all Detroit Sports topics, as well as national sports information. In addition, ESPN’s Mike & Mike will continue to air from 6am-8am on the station.

“Ryan and Rico have done an outstanding job for us at Detroit Sports 105.1 since we launched the radio station two years ago,” said Greater Media Detroit Vice President and Market Manager Steve Chessare. “We look forward to them continuing to engage Detroit sports fans on their drive to work.”

Ryan & Rico have been an intricate part of the Detroit Sports 105.1 family. The duo has helped to keep Detroit area Sports Fans at the top of their game with the latest local and national sports news.
Posted 3:19:00 AM