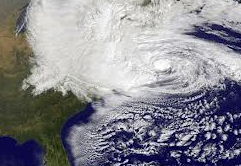 The study is based on interviews of more than 5,900 residential customers in 31 utility territories impacted by Hurricane Sandy. The online survey was conducted from January 4 to January 11, 2013. Overall responsiveness is measured by examining three areas across electric utilities and local, state, and federal governments: preparedness for the hurricane; efforts to support hurricane recovery; and effectiveness of communications.

Hurricane 's damage is estimated at $50 billion and is considered the second-costliest hurricane in history.
Posted 6:50:00 AM