Doctor who tried to save John Lennon remembers 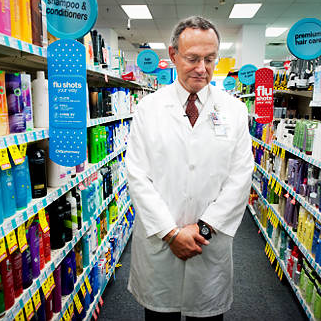 Dr. Stephan Lynn stands in the shampoo aisle of CVS, which used to be the emergency room of Roosevelt Hospital, and the spot where John Lennon was declared dead.

Thirty years ago this week, a young New York doctor held the heart of a generation in his hands.
It was about 11 p.m. on Dec. 8, 1980, and Dr. Stephan Lynn had just walked into his West Side apartment after a 13-hour shift at Roosevelt Hospital's ER.

"Please come back," a nurse blurted out to the 33-year-old director of emergency medicine. "The police are bringing in a gunshot wound with no vital signs."

Neither Lynn nor the nurse had any idea who the victim was - nor did they know that minutes earlier, a deranged stalker fired four bullets into John Lennon as the former Beatle and his wife, Yoko Ono, stepped out of a limo in front of The Dakota on W. 72nd St.

As New Yorkers are poised to mark the 30th anniversary of Lennon's death with vigils and tributes, the doctor who played a central role that night recalled the heroic - but futile - efforts to save a musical genius whose death broke the world's heart.

Sitting in Roosevelt's emergency room, where he is still on the job, the soft-spoken doctor, now 63, recounted every detail as if it were yesterday:


"I raced back to the hospital in a cab and got there just two minutes before two police officers arrived" with a fading Lennon in the back seat, Lynn recounted.

"I had no idea who the patient was. It wasn't until a nurse looked inside his wallet for identification that we realized who it was.

"In death he looked almost nothing like he looked in life. He was gray, he was gaunt, he had no signs of life. He had no pulse, no blood pressure...He was not breathing. We could have at that moment declared him dead."