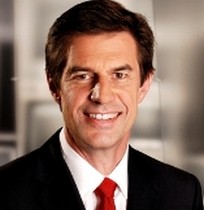 Bob Sellers was a news co-anchor for WSMV's 6 and 10 o'clock broadcasts in Nashville. He was previously an anchor for WTTG's Fox 5 Morning News. He also was an anchor for Fox News Channel. Joining the network in 2002, he regularly hosted weekend hours of Fox News Live and frequently anchored Fox News Live programs during the week. He also reported from Iraq during June of 2003.

Prior to Fox News, Sellers worked at CNBC anchoring Market Watch and Today's Business, in addition to filling in as anchor on programs such as Squawk Box and Power Lunch. Additionally, he worked for KING-TV in Seattle, WA, KENS-TV in San Antonio, TX, and KTVL in Medford, OR. He joined WTTG Fox 5 Morning News in 2006 where he served as a morning news anchor until July 2008.

Sellers is currently Senior Investment Consultant for Gary Goldberg Financial Services, a boutique money management company headquartered in Suffern, New York. He has appeared as a markets guest on CNBC and has published numerous columns in various publications, most of them related to business. He has written columns for "Gear" and "Success" magazines and has placed work in newspapers including the Los Angeles Times and the Cincinnati Enquirer.

Sellers writing for hig blog at the Huffington Post:


I lost my job last Friday. I am one of the white collar casualties of a struggling economy and changing industry (television) -- and let's be frank -- managers looking for a scapegoat to save their own jobs.

I sat across the desk from a boss who told me that management had decided to go another direction. This was the same boss that a few months before had given me a glowing personnel review for the work I had done as the 6 p.m. and 10 p.m. anchor at the NBC affiliate in Nashville. The same boss who told me a piece
I wrote for the Huffington Post on local flood coverage was "extraordinarily well-written" and reflected well on the station. The one who told me three months ago not to leave to take a job in Washington, D.C. because they were very happy with my work and wanted me here. (That job has since been filled.) The same boss that submitted video that resulted in my being nominated for two Emmy's for coverage of breaking news. (The awards haven't been handed out yet.)

This is the American workplace, 2010. No loyalty, and a cavalier consideration for the life changing consequences of treating people and their livelihoods as mere pieces on a chess board.

So what comes next? I don't know.

Here's what I do know. It's hard to sleep not knowing where your next paycheck is going to come from; not knowing whether we'll run out of savings as you try to land a job in an economy worse than at any time since the Great Depression; not knowing whether contacts you've made over the years will throw you a lifeline with a job opportunity, or be part of a whisper campaign to define you as a sad vestige of your former professional self who hasn't faced the reality that the world has changed and you're not part of where it's going.