The Rundown: 2.1M File, State Of Agony In Minneapolis 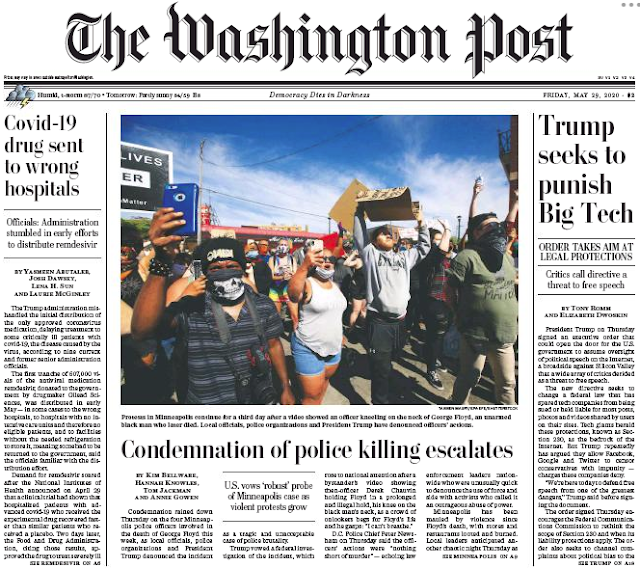 The Labor Department reported Thursday that another 2.1 million Americans filed new claims for unemployment benefits last week even as businesses around the country have gradually begun to reopen, bringing the total number of Americans who've filed for unemployment since the coronavirus shutdowns began in March to a staggering 41 million. But there were some positive signs in the data, as the overall number of Americans currently getting unemployment benefits fell for the first time since the crisis began, from 25 million to 21 million. Additionally, the number of first time unemployment applications fell for an eighth straight week.


We have just reached a very sad milestone with the coronavirus pandemic deaths reaching 100,000. To all of the families & friends of those who have passed, I want to extend my heartfelt sympathy & love for everything that these great people stood for & represent. God be with you!
— Donald J. Trump (@realDonaldTrump) May 28, 2020


There have been more than 101,600 deaths in the U.S. from the virus as of last night, according to Johns Hopkins University's count, and more than 1,721,000 confirmed cases.

In other developments:
➤PROTESTS CONTINUE IN MINNEAPOLIS, ELSEWHERE OVER FLOYD'S DEATH; POLICE STATION SET ON FIRE: Protests continued in Minneapolis for a third day and spread to other places in the country Thursday over the death of George Floyd, a 46-year-old black man who died Monday after a white officer held him facedown on the ground handcuffed with a knee on his neck for more than eight minutes as he pleaded that he couldn't breathe and finally became unresponsive. Cell phone video of the incident sparked national outrage.

Some of the protests have turned violent and led to looting, and last night protesters in Minneapolis broke into a police station and set it on fire. The 3rd precinct station had been the focus of many protests, and staff had evacuated it before the protesters broke in. Minnesota Governor Tim Walz activated the National Guard earlier in the day, and 500 of them were being sent to Minneapolis and surrounding areas. However, there were peaceful marches as well in the city. Protesters turned out in New York City's Union Square, where they clashed with police, and demonstrators blocked traffic in Denver. There were demonstrations in Los Angeles and Memphis on Wednesday.

D.A. Says Won't 'Rush to Justice': Derek Chauvin, the officer who held his knee on Floyd's neck, was fired the next day, as were the three other officers who were with him and did nothing to intervene. There are growing calls for criminal charges to be brought, including from Minneapolis Mayor Jacob Frey. Hennepin County District Attorney Mike Freeman said yesterday, "That video is graphic and horrific and terrible, and no person should do that. But my job in the end is to prove that he violated a criminal statute, and there's other evidence that does not support a criminal charge." He said they will investigate, quote, "as expeditiously, as thoroughly and completely as justice demands," but stated, "I will not rush to justice." The U.S. Attorney for the District of Minnesota Erica MacDonald called it "imperative" that the public understands, quote, "how seriously we are taking this and how quickly and swiftly we are moving on this." The FBI is also investigating.

BREAKING: The third precinct police station is on fire. Rioters have taken over pic.twitter.com/AJg4jDr9Tz
— Max Nesterak (@maxnesterak) May 29, 2020


911 Call Transcript: The city released the transcript yesterday of the 911 call from a convenience store that the officers responded to about a man using a counterfeit $20 bill. The caller described the man as "awfully drunk" and "not in control of himself." When the 911 operator asked if the man was under the influence of something, the caller said, "Something like that, yes. He is not acting right." Police said Floyd matched the description of the caller and stated that he resisted arrest. However, CNN reported that surveillance video from a nearby restaurant appears to contradict that Floyd was resisting.

Chauvin Complaints, Shootings: The Minneapolis Police Department said yesterday that Chauvin had 18 prior complaints filed against him. It's unclear what they were for, but two of them were closed with discipline, which CNN said was apparently a letter of reprimand. He was also involved in two shootings. In the first, he was one of six officers who fatally opened fire on a stabbing suspect in 2006 after a chase that ended when the suspect pointed a shotgun at them. A grand jury decided the use of force was justified. In the second, Chauvin shot a man two years later while responding to a domestic dispute. Chauvin shot the suspect, who survived, twice in the stomach after he went for Chauvin's gun.

➤TRUMP SIGNS EXECUTIVE ORDER CHALLENGING SOCIAL MEDIA PROTECTIONS: President Trump signed an executive order Thursday challenging social media companies' protection from lawsuits, two days after Twitter labeled two of his tweets claiming that mail-in voting would lead to widespread vote fraud as "potentially misleading." Trump called the fact checks "editorial decisions" that were political activism, and said it should lead Twitter to lose its liability protection for what's posted on its platform. The protection is given because the platforms aren't considered publishers. The executive order directs that rule-making agencies including the Federal Communications Commission and the Federal Trade Commission be asked to study whether they can put new regulations on the companies. However, experts doubted much could legally be done without Congress acting. Twitter CEO Jack Dorsey said Wednesday night that Twitter would continue to, quote, "point out incorrect or disputed information about elections globally." 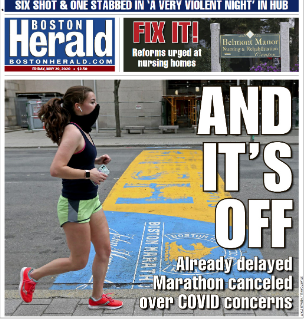 ➤BOSTON MARATHON CANCELED FOR FIRST TIME: Organizers announced yesterday that the Boston Marathon had been canceled because of the coronavirus pandemic, the first time that's happened in its 124-year history. The marathon had already been postponed from April 20th to September 14th, before now being scrapped altogether. It will be replaced by a virtual event in which participants who verify that they ran 26.2 miles on their own will get their finisher's medal. They can run between September 7th and 14th.

➤NFL COACHES EXPECTED TO BE ALLOWED AT TEAM FACILITIES NEXT WEEK: NFL coaches may be allowed back in team facilities starting next week, according to a memo sent by NFL Commissioner Roger Goodell Thursday to all 32 teams. In the memo, obtained by the AP, Goodell says, "We expect that next week clubs will be permitted to include members of their coaching staffs among the employees permitted to resume work in the club facility." A limited number of team personnel, but not coaches, have been allowed at facilities since May 19th. The only players who are allowed are those undergoing therapy and rehab for injuries.

➤TEXAS TO ALLOW FANS AT OUTDOOR SPORTING EVENTS AT 25 PERCENT CAPACITY: Texas Governor Greg Abbott announced Thursday that fans will be allowed to attend outdoor professional sporting events in almost all counties in the state at up to 25 percent capacity starting this Sunday. Guidelines from the state recommend that fans and employees remain six feet apart from anyone who's not in their household. Any indoor sporting events will still have to be held without fans.
Posted 4:34:00 AM