Podcasts: When and Where People Are Listening 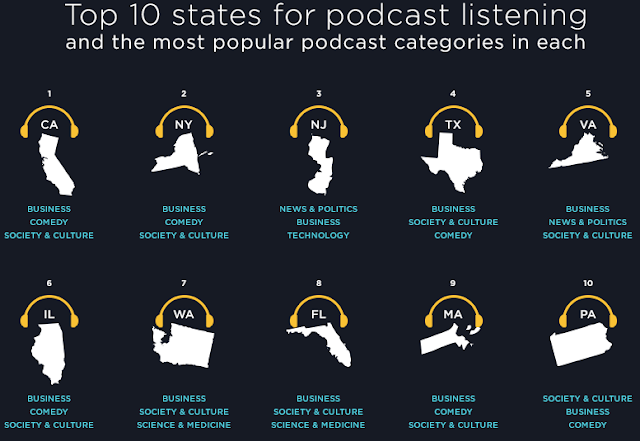 You might think Virginians would listen to news and politics podcasts the most, but that honor goes to New Jerseyans. And while Texans are all business, Pennsylvanians are all about their pop culture.

AdWeek reports Acast, a podcast streaming platform and distributor, has discovered some new insights about podcast listeners like the genres people listen to most frequently in the states that do the most listening.

In June, Acast measured more than 14 million listens in the U.S., including both streams and downloads, which creates a more accurate number for its marketing partners.

“Downloads can be a vanity metric,” said Oskar Serrander, Acast’s general manager in the U.S. “If we’re trying to monetize this medium, we have to show what we’re actually selling.”

Based in Europe and seeing robust growth in the U.S., Acast was one of the first distributors to monetize podcasts and utilize machine learning to suggest new shows to listeners.

“People are listening to more shows on a monthly basis than ever before,” Serrander said, “and because of that, we’re excited to see a mix of popular genres.”

Podcasts about business appeared in the 10 states that Acast found to have the highest number of podcast listens. California, New York, New Jersey, Texas and Virginia were the states with the most listens, while Illinois, Washington, Florida, Massachusetts and Pennsylvania round out the top 10. Acast didn’t find any one genre leading the pack, but business and society and culture podcasts appeared in nine of the top 10.
Posted 3:18:00 AM