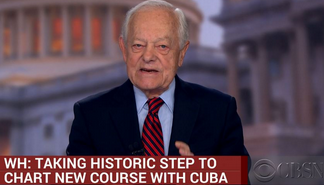 Bob Schieffer of CBS News has witnessed many major events in his more than 50 years in the news business. When he uses the word "bombshell" to describe a news item, it is clearly a major story.

The "Face the Nation" host described Wednesday's announcement that the U.S. would normalize relations with Cuba as just that, a "bombshell."

"I kind of came of age in a time when Fidel Castro was the enemy, and now we see a total reversal of that," Schieffer said Wednesday on CBSN. He noted that at the time, Castro was seen as potentially behind the 1963 assassination of John F. Kennedy, and decades later President Obama has decided to re-establish ties with the Castro government.

Another aspect that shocked Schieffer was how secret the Obama administration was able to keep its negotiations with the Cubans. "Every once in a while I guess Washington can keep a secret and this time it certainly did," he said.

The political fallout from this shift in policy will be felt in Congress and on the presidential campaign trail. Schieffer said that all of the candidates will have to voice their opinions on the matter, which can have a big impact on one of the most important states in presidential elections.

"One of the main reasons that our policy towards Cuba has not changed over the years is that presidential candidates wanted to carry the very important state of Florida," Schieffer said. "The Cuban vote there was so strong that you couldn't much think about doing that unless you were against Castro."
Posted 2:12:00 AM