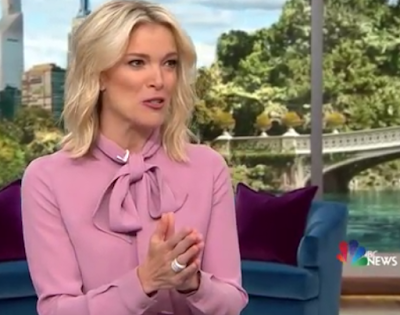 NBC insiders are going to need some serious convincing about Megyn Kelly’s new show, report PageSix at The NYPost.

If TV critics are confused by what one called her “Bride of Frankenstein” morning show, Page Six reports that veteran network producers are baffled by the decision to make her “Megyn Kelly Today” a “politics-free zone.”

In the run up to Monday’s premiere in the 9 a.m. “Today” slot, Kelly — who built her reputation on hard-hitting Washington coverage, not to mention her public spat with then-presidential candidate Donald Trump — said that she’s “not a political animal and I never have been.”

During the launch episode she announced that the show would avoid politics entirely (although it’ll include some news coverage).

“They spent all that money on this great political anchor and journalist,” said an industry insider. “If you take those things away, what are you paying for?”

The show premiered on Monday to jeers from many critics, according to Politico.

The Washington Post’s Hank Stuever was particularly cutting: “The debut was like watching a network try to assemble its own Bride of Frankenstein, using parts of Ellen DeGeneres, Kelly Ripa and whatever else it can find.”

CNN’s Brian Lowry allowed that, “It's absurdly early, of course, to draw any conclusions about the efficacy of the Kelly experiment.” Still, he continued, “After tepid marks for her prime time newsmagazine and now her addition to ‘Today,’ it's worth considering that NBC News brass leapt at the opportunity to snag a high-profile news star without having fully thought through how best to deploy her.”

Jezebel also mocked the show, saying Kelly looked like “a HomeGoods catalog brought to life” and Newsweek was critical, as well.

LA Times TV critic Robert Lloyd was more generous, noting, “It is impossible to tell how anyone will do in this job from a first episode. (Guarded, even disappointed, reactions greeted the bows of Jimmy Fallon, Stephen Colbert and Trevor Noah.)”