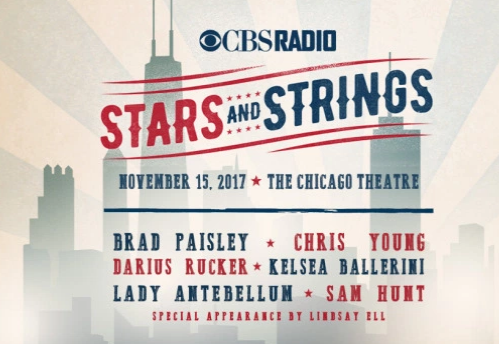 CBS RADIO will present its third annual STARS AND STRINGS show, in honor of our nation’s Veterans and their families, on Wednesday, November 15 at The Chicago Theatre in downtown Chicago.

“STARS AND STRINGS is CBS RADIO’s annual tribute to our nation’s military veterans who do so much to protect our freedoms and our very way of life,” said Chris Oliviero, Executive Vice President of Programming, CBS RADIO.  “We’ve assembled an amazing roster of artists to help us celebrate this special group at the landmark Chicago Theatre.”

Returning this year is the Veteran’s Village Tent adjacent to The Chicago Theatre in the Benton Place Alley. The Tent is open to the general public from 3:00 PM to 5:30 PM and then exclusively to show ticket holders. There, Lindsey Ell will perform an acoustic set for attendees.
Posted 5:36:00 AM