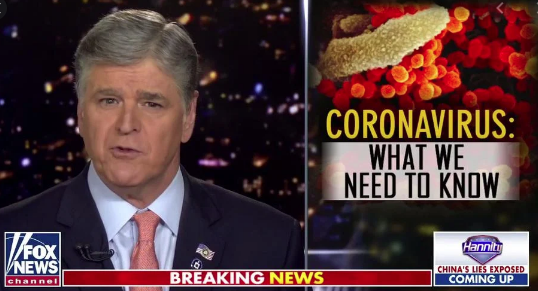 Fox News Channel’s Sean Hannity had his lawyer Charles Harder send a letter to the New York Times demanding it apologize and retract reports about his comments on the coronavirus pandemic, saying the newspaper “all but accused me of murder.”

“What they wrote was false, it is provably false, and rather than do the ethical, honest, ‘journalistic’ thing which would be correct and that’s to retract and apologize, they secretly stealth-edited their mistake. To me, an admission of guilt. The stealth addition rendered their phony headline false,” he said on Monday's broadcast. 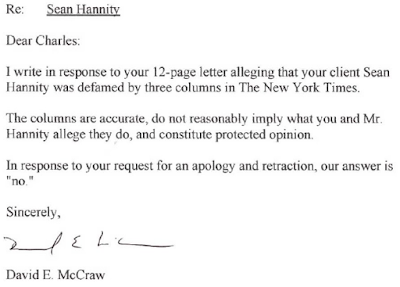 The NY Post reports the apology request pertained to three articles in the Times from columnist Ginia Bellafante, contributing writer Kara Swisher and media columnist Ben Smith that showed “an outrageous disregard for the truth.”

“Failure to do so will leave Mr. Hannity with no alternative but to consider instituting immediate legal proceedings against you,” the letter said, according to Fox News.

Harder accused the Times of “mischaracterizing Hannity’s coverage of the coronavirus pandemic and blaming him for the death of Joe Joyce.”Enlarge ImageThe New York Times buildingCorbis via Getty Images

Joyce, 74, a Hannity fan, and his wife took a cruise to Spain on March 1.  His daughter, Kristen, told Bellafante that her father decided on the cruise despite warnings about the danger.

“He watched Fox, and believed it was under control,” the daughter told Bellafante.

Joyce became ill on March 27 after returning from the cruise and died on April 9 of the coronavirus.

But Harder pointed out in his letter that Hannity made those comments on March 9 after the Joyces had left for their cruise.
Posted 1:50:00 AM