In 1943...Jimmy Durante (actor/singer/comedian) & Garry Moore (actor/comedian/game show host) had their radio debut. They teamed for The Durante-Moore Show . Durante's comic chemistry with the young, brushcut Moore brought Durante an even larger audience. 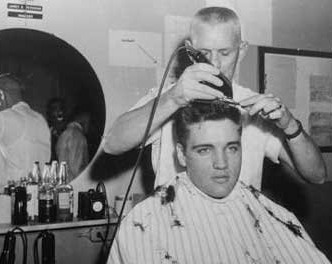 In 1958…Reporting to Ft. Chaffee, Arkansas by bus after his military induction, Elvis Presley had his famous hair cut short by Army barber James Peterson. The pop icon was assigned to the Second Medium Tank Battalion of the 2nd Armored Division, the "Hell On Wheels" division once led by General George Patton, based at Fort Hood, Texas.


In 1967…At the RKO 58th Street Theatre in New York City, the Who and Cream made their American debuts at Murray the K's Easter Show.

In 1971…New York's WNBC became the first U.S. radio station to ban Brewer and Shipley's hit "One Toke Over The Line" because of alleged marijuana references in the song's lyrics.

His advice call-in show, "What's Your Problem?," aired from 1967 until the mid-1990s on stations WCAU-AM and WPEN-AM in Philadelphia, WOR-AM and WEVD-AM in New York and in national syndication on NBC Talknet.

A city planner by training, with a civil engineering degree from City College of New York and a master's degree from the Wharton School at the University of Pennsylvania, Meltzer moved from a career as a Philadelphia expert in urban problems to a radio host on WCAU. In 1973 Meltzer's show moved to WOR in New York.