Los Angeles Times’ newsroom guild agreed Friday to accept a 20% reduction in pay and hours for its members amid a devastating decline in advertising because of the coronavirus crisis.

In an effort to help management reduce expenses, nearly 440 journalists represented by the Media Guild of the West will have their wages and hours cut for 12 weeks, beginning May 10. Journalists will work four days each week instead of the usual five days. The reductions are expected to save more than $2 million.

“This is the best possible deal we could have made under the circumstances,” Anthony Pesce, president of the NewsGuild-Communications Workers of America Local 39213, said. “We worked very quickly to arrive at a solution that will ultimately help everyone.” 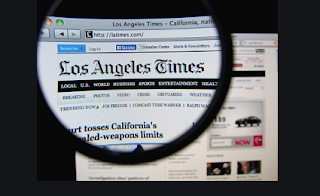 With the agreement, The Times becomes the latest news organization to cut pay for journalists due to the COVID-19 pandemic. Newspaper advertising has been decimated as retailers, movie theaters and live event sponsors have pulled their ad buys because their stores and venues are closed. Newspapers were already struggling before the pandemic because of a migration of ad dollars to internet giants like Facebook and Google, but the health crisis has made the situation more dire.

As part of the pact, The Times’ management said it would not lay off any member of the guild during the 12-week period. At the guild’s urging, The Times also made a commitment to apply for California’s Unemployment Insurance “Work Sharing Program,” a program established in 1978 and that allows eligible employees to receive unemployment benefits even though they still have a job. The Times also will seek unemployment benefit coverage for its journalists in Washington, D.C.

Should the state decline The Times’ application, the paper would abandon its plan to reduce the wages and hours of those represented by the guild.

The pay reductions will not extend beyond Aug. 1, unless the two sides agree to further cuts.

The paper, along with its parent California Times, has already taken steps to slash costs in response to the pandemic. Senior managers, including eight top editors in the newsroom, had their pay cut by as much as 15% in mid-April. Some business-side employees were furloughed, and some non-guild employees will have the company’s match to their 401K contributions suspended.
Posted 1:17:00 AM