Americans continue to give the news media a solid grade overall for coverage of the COVID-19 pandemic, with 69% of U.S. adults saying the media have covered the outbreak very well or somewhat well, a number that is virtually unchanged from the 70% of respondents who said the same in a mid-March survey.

And as the toll from the coronavirus has grown dramatically over time, the percentage of those who say journalists have greatly or slightly exaggerated the risks of the outbreak has decreased notably in recent weeks, dropping from 62% in March to 48% in April, according to a new analysis of data from Pew Research Center's Election News Pathways project.

But underlying these overall numbers are deep partisan divisions about the media’s coronavirus coverage — divisions that were evident in March and remain so in April.

More than half of Republicans and Republican-leaning independents (54%) say the media have covered COVID-19 somewhat or very well, while about eight-in-ten Democrats and Democratic leaners say the same (82%). 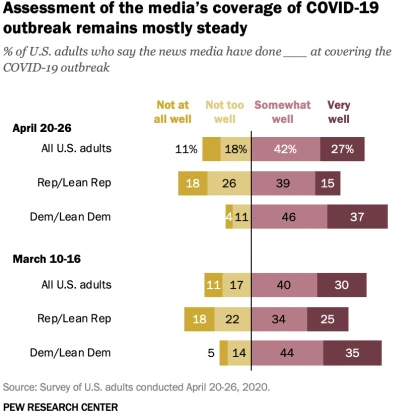 The share of U.S. adults saying the news media have exaggerated the risks of coronavirus declined across both parties from March to April. But that decrease was considerably more pronounced for Democrats than Republicans — by about a two-to-one margin. The new analysis stems from a survey conducted online April 20-26, 2020 among 10,139 U.S. adults who are members of the Center's American Trends Panel.