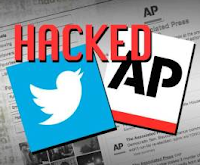 Three federal agencies are now investigating an incident Tuesday in which hackers hijacked the Twitter account for The Associated Press and momentarily erased $136 billion from the stock market after they posted a fake Tweet reporting that there had been explosions at the White House that injured President Obama.

According to a story by Nicole Perlroth for the NYTimes Bits Blog, a group calling itself the Syrian Electronic Army claimed responsibility for the attack on Twitter, but the Federal Bureau of Investigation is investigating who was behind the attack, and the Securities and Exchange Commission and the Commodity Futures Trading Commission are investigating the impact of the attacks on the market.

The AP’s account was the fourth prominent Twitter account of a media organization to be hacked in recent months — accounts for CBS, NPR and the BBC have all been hijacked by hackers recently — but the AP incident had the most serious impact. Within seconds of the fake AP post, the Dow Jones Industrial Average nosedived, dropping 150 points, before recovering five minutes later. High-frequency trading algorithms that are designed to make trades based on certain headlines served as a catalyst.