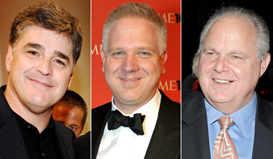 Fresno Fans of Rush Limbaugh, Sean Hannity and Glenn Beck will soon need to find their favorite talkers somewhere other than KMJ (AM 580 and FM 105.9).

Peak Broadcasting, the parent company of KMJ, announced Friday morning that its 25-year relationship with Premiere Radio Networks, which syndicates Limbaugh and the others, is ending.

Mike Osegueda  at The Fresno Bee writes Peak Broadcasting didn't say exactly when the shows would stop airing, only that they'd be phased out in the next 90 days.

"We have a clear plan," said Peak Broadcasting marketing director Chris Miller, "but due to the obvious competitive situation, we are not going to divulge our plan at this time."

Tom's Take: Listen for one of Clear Channel’s 8 stations in the market to become the new home of the Premiere’s programming at New Years.
Posted 3:00:00 PM