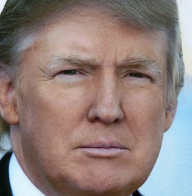 On Monday afternoon Trump fired off six tweets in a row attacking CNN's news coverage and accusing the network of being the "press shop for Hillary Clinton."

According to CNN, he commented that "people believe CNN these days almost as little as they believe Hillary....that's really saying something!"

Later Monday, he returned to the subject again with three new tweets accusing the network of biased coverage.

It is unclear if Trump personally posted the messages or if a campaign staffer posted them under his name.

Some of the anti-CNN tweets were posted at the exact same time the network was televising an interview with a high-profile Clinton critic -- Pat Smith, the mother of an American who was killed during the terrorist attack in Benghazi, Libya, in 2012. But Trump made no mention of that.

The tweets came just a couple of hours before CNN was due to release a new national poll about the presidential race, leading to speculation that perhaps Trump was pre-emptively assailing CNN in an attempt to discredit the poll results.

Meanwhile, TVNewser reports CNN’s Fareed Zakaria described efforts by Donald Trump to clarify his remarks about Russia and Ukraine as “the mode of a bullshit artist.”

Zakaria made the comment Monday on CNN’s Wolf, telling host Wolf Blitzer “every time it is demonstrated that Donald Trump is plainly ignorant about some basic public policy issues … he comes back with a certain bravado and tries to explain it away with a tweet or statement.”
Posted 5:06:00 AM