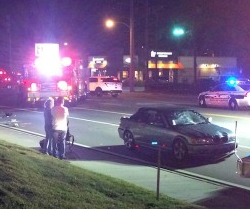 On Monday (November 10th), current WHPT 102.9 FM The Bone, Tampa and former producer of Rover’s Morning Glory radio show on WMMS 100.7 FM  in Cleveland, Rob Garguilo, received the devastating news that his girlfriend and two children were struck by a vehicle while trying to cross a street.

Seeking to help his friend in need, the Cleveland show’s host, Rover MacDaniels, launched a crowdfunding campaign on GoFundMe to help raise $35,000 for the medical expenses of Garguilo’s family.

The description of the campaign reads, “On November 10, 2014 the girlfriend and two children of Rob Garguilo, former producer of Rover’s Morning Glory, were struck and critically injured as they were crossing the street.

“Many people on the show came to identify with Rob, his girlfriend Sarah, and their children Ben and Serena over the past 5 years.  Sarah is 32, Ben is 4 and Serena was just 5 weeks old. At this time it is unknown if any of those involved have medical insurance, etc. Please donate to this fund which will go toward the medical expenses and costs associated with this accident.”

Police report the three was struck by a vehicle while crossing a street about an hour after sunset. They were not in a crosswalk and police report charges are not expected to be filed against the driver.
Posted 3:01:00 AM