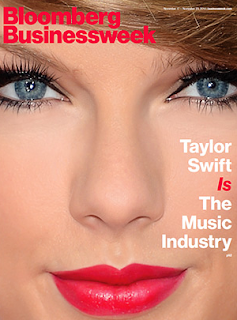 The latest edition of BloombergBusinessWeek taks an indepth look at Scott Borchetta and his Big Label Music Group.  The article also examines the Taylor Swift-Spotify dust-up and the music business in general.

The article by Devin Leonard notes the week of 1989’s debut, the Big Machine Label Group had eight songs on Billboard’s Hot Country Songs chart, more than its better-known competitors, including Capitol Nashville and MCA Nashville.

Big Machine bills itself as an indie label, but since launching in 2005 it has evolved into a company with 88 employees who work in music publishing, management, and merchandising, and occupy four buildings. The business has multiple record labels. Two of them, Big Machine and Valory Music, are controlled entirely by Borchetta and his partners. (Borchetta owns 60 percent of Big Machine; other reported equity holders include the Swift family and country singer Toby Keith.)

Two other labels, Republic Nashville and Dot Records, are joint ventures with Republic Records, a division of Universal, the world’s largest record company. In 2012, Borchetta struck a deal to market and distribute the original music from Nashville, ABC’s hit prime-time soap opera. “He started as a Valley boy and now is running all of Nashville,” says Dawn Soler, senior vice president for music at ABC Television.