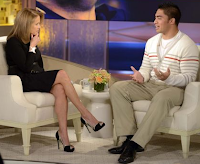 Voicemails from a person that Notre Dame linebacker Manti Te'o says was pretending to be his online girlfriend were played during an interview he did with Katie Couric that aired on her syndicated show Thursday.

Three voicemails were played that Te'o said were left for him last year by someone he believed to be "Lennay Kekua," a woman he fell for online, but never met in person, and who he says he thought had died in September of leukemia.

Deadspin.com exposed the hoax earlier this month, saying Kekua never existed. But Te'o has denied any involvement, saying he'd believed the whole story until he got a phone call on December 6th from the person he'd believed to be Kekua. Some had charged the Heisman Trophy runner-up might have been involved in the hoax for publicity.

The first voicemail was from what was supposed to be Kekua's first day of chemotherapy:


In the second, the person was apparently upset by someone else answering Te'o's phone:


And the third was left on the day he believed Kekua was released from the hospital, the day before she supposedly died:
Posted 3:15:00 AM