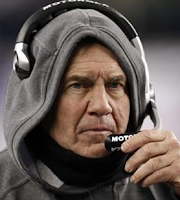 Bill Belichick may not be a poor sport, but he plays one on TV according to a story at USAToday.

The New England Patriots coach continued his long history of petulant behavior when he declined an interview with CBS following his team's loss to the Baltimore Ravens in the AFC championship.

During the network's postgame show, host James Brown told viewers that sideline reporter Steve Tasker had requested an interview with Belichick, but that the coach declined.

The Patriots sent out third-year safety Devin McCourty instead, which is like asking for an interview with the president and getting Joe Biden's secretary.


CBS Analyst Shannon Sharpe had this to say about Bill Belichick stiffing his CBS postgame interview.


"There's something to be said about being gracious in defeat," Sharpe said on CBS' postgame show. "We've seen the New England Patriots five times in the last 12 years be victorious [in the AFC championship game). We've seen the opposing coaches who lost come out and talk to our Steve Tasker. Coach [Bill] Cowher did it when they lost to them, we saw this last week.

"Bill Belichick makes it real easy for you to root against the Patriots. You can't be a poor sport all the time. You're not going to win all the time, and he does this every time he loses. It's unacceptable."
Posted 3:01:00 AM