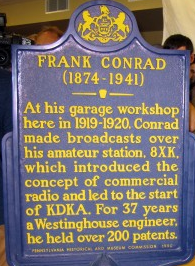 Conrad began what are considered the first regular radio broadcasts from his garage in 1916, and is responsible for the founding of the first licensed broadcast station in the world: KDKA.

Conrad first became interested in radio in 1912 when, in order to settle a bet on the accuracy of a watch, Conrad built a radio in order to hear time signals from the Arlington, Virginia Naval Observatory. He then constructed, in his garage, a new transmitter, licensed in 1916 as 8XK, whose signal could be heard throughout the Pittsburgh area. In response to popular demand, Conrad began broadcasting for two hours each Wednesday and Saturday night. When all civilian amateur radio operations ceased in 1917, Conrad began using his radio for military purposes during World War I.


Conrad resumed his amateur radio broadcasts in October 1919. Most of the content of these early broadcasts was music: Conrad's sons and niece were talented musicians and Conrad played numerous songs from his record collection. He soon ran out of records, however, and struck a deal with a local music store: if the store would supply him with records, he would give the store on-air promotions. This exchange is arguably the first broadcast commercial in airwave history. He has also been called the first DJ in history.

There are also reports of football scores reported, as well as some talk programming. The vice-president of Westinghouse soon saw a newspaper advert for radio sets that could receive Conrad's broadcasts. He saw the potential for mass communication that radio offered, and Westinghouse began manufacturing radio receivers.

Westinghouse applied for a callsign in mid-October 1920. The callsign arrived just in time for the November 2, 1920, election, and the radio station KDKA was born.

The original station was a shack on top of a Westinghouse building in East Pittsburgh. Conrad was not there to witness the historical broadcast, however; worried that the station might go down, he was sitting in his Wilkinsburg garage with his own transmitter as a backup.
Posted 3:04:00 AM