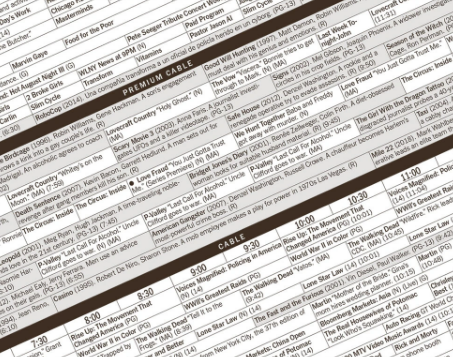 After 81 years, this past weekend was the series finale for the daily television listings in the print editions of The New York Times.

The majority of subscribers won’t even notice the removal of the TV grid and accompanying What’s on TV column after this weekend’s papers: For years now, The Times has published the grid only in its New York City edition, and not the national one. But like any cancellation, the change is sure to leave some readers disappointed.

Gilbert Cruz, The Times’s Culture editor, said the time had come because of the increasing number of digital on-demand options. “We are firmly in the streaming age,” he said, “and the TV grid no longer reflects the way people consume television.”

“It used to be you’d flip through the TV guide and say, ‘Oh my God, this movie is on basic cable this week!’" he added. “But now that buzzy show is on Netflix whenever you want to watch it.”

The change also enables The Times to print a single version of its Arts section for both city and national subscribers, helping ensure that the paper reaches readers on time. “We’re trying to streamline the production process as much as possible amid the pandemic,” Tom Jolly, The Times’s associate masthead editor who oversees the print edition, said.