Group photo of the Benztown Brigade at last night's Jackson Turkey Giveaway, including E.J. Jackson, pictured in the black baseball cap in the center to the right of Dave "Chachi" Denes, Benztown President (sporting his Movember mustache, also for charity), whose wife and Benztown Business Manager, Bonnie Nordling Denes, is to the left of Chachi. To her left is Kevin Horton, Benztown's Imaging and Production Director for JACK FM, Flashback and Adrenaline). To Kevin's left (in the red jacket) is Justin Case, Benztown's Director of Programming and Imaging. To the right of Mr. Jackson is Masa Patterson, Benztown's VP, Sales and Operations. To Masa's right in the black t-shirt is Chris Johansing, Director of Marketing for Benztown.

The Benztown Brigade volunteered this week at the E.J. Jackson Foundation Turkey Giveaway in Los Angeles, which feeds over 12,000 hungry Angelenos in need every Thanksgiving.

The 33-year annual charitable event served long lines of people, stretching for blocks, as they waited patiently to receive a turkey with all the trimmings-- cornbread, greens, sweet potatoes, cranberry sauce, fresh produce, cookies, water, and more donated by the E.J. Jackson Foundation.

The E.J. Jackson Foundation's mission is to feed as many hungry families, senior citizens, and veterans throughout the year. Benztown's Burbank, CA, employees and their friends and families have joined them in this community service effort for the past four years. In addition to rolling up their sleeves this year, Benztown donated $1,000 to offset some of the costs associated with the food giveaway. 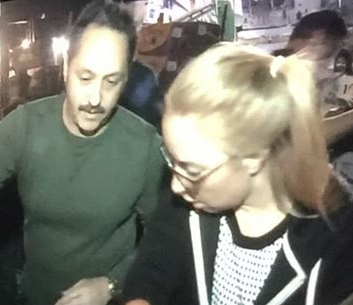 Dave "Chachi" Denes, Benztown President, and his wife, Bonnie Nordling Denes, Benztown Business Manager, work in the kitchen at last night's Turkey Giveaway in L.A. This shot was taken from a news story that aired Monday night on L.A.'s KDOC-TV
Posted 3:02:00 AM